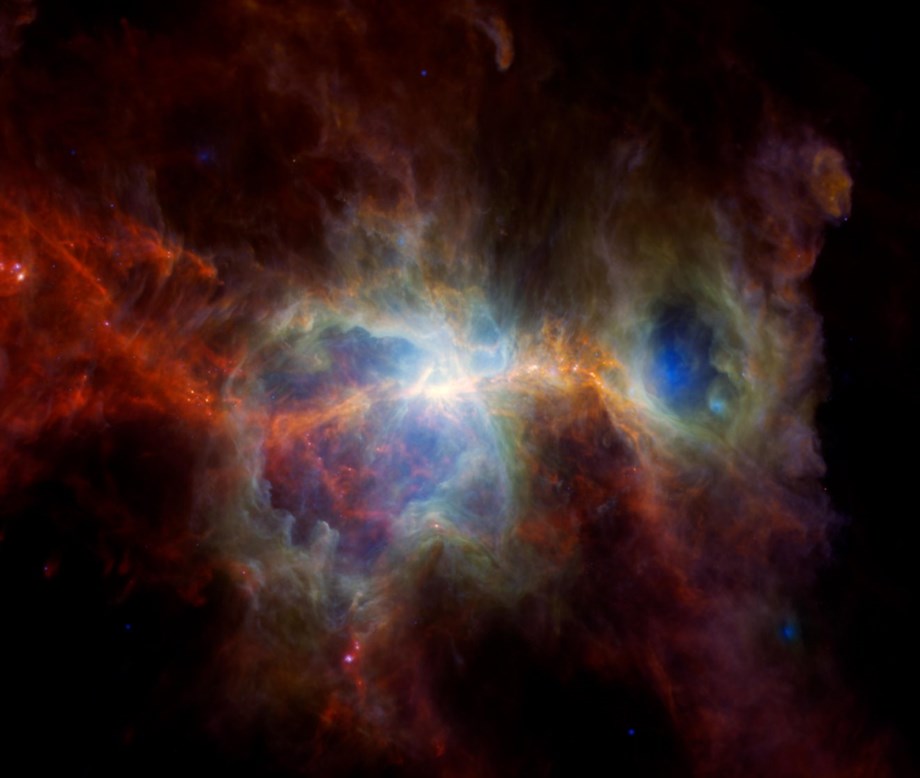 New images combining previously released data from three infrared space telescopes from NASA and ESA (European Space Agency) show that the Orion Nebula is being transformed by massive stars that live and die within it. .

The Orion Nebula looks like a hunter holding up a club and shield toward an unseen target. The Orion Nebula is her 1,500 light-years away from us, making it the closest star-forming region to Earth.

The two giant caverns that dominate the clouds in this region were carved out by massive stars (not visible in this image) that can emit up to a million times more light than the Sun.

This infrared image of the Orion Nebula shows dust but no stars. Blue light indicates warm dust heated by invisible massive stars. Observed in infrared light (invisible to the human eye), this view was provided by NASA’s retired Spitzer Space Telescope and Wide Field Infrared Surveyor (WISE). Both are managed by the agency’s Jet Propulsion Laboratory in Southern California.

The red and green lights show data from ESA’s now-defunct Herschel Space Telescope, which captures wavelengths of light in the far-infrared and microwave ranges. Dust that looks green is slightly cooler, while red indicates cold dust that reaches temperatures as low as -440 degrees Fahrenheit (minus 260 degrees Celsius).

The orange filament between the two hollow regions is where dust condenses to form new stars. Over time, these filaments could give birth to new giant stars and reshape the region, according to NASA.

A tale of death and dust! ✨Combining data from three of his previously released telescopes, a new image shows the Orion Nebula region being altered by massive stars that live and die within it. detail: https://t.co/bWpyu5otGE pic.twitter.com/pD2OQTchKN

Prostate Cancer: Everything You Need to Know

In a B.C. first, UVic mini-satellite launched into space after four years of work

Evidence of Higgs boson contributions to the production of Z boson pairs at high...

What percentage of the universe is dark matter?